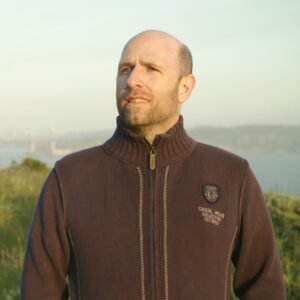 As long ago as I can remember, I liked to ask questions. I remember sitting at a “grown-up table” at the age of 8 and asking questions about some tribes in Africa. This documentary is something of the same vein. I started with the idea of finding out what inner resources we have to help us cope with the world as it is. I was planning on doing a trip to Palestine and then I met one person who told me about another person and so on, read articles learning of others, and then, without even realizing it, I had interviewed more than 80 people and gone to more countries than I ever imagined! It seems that everything that happened was planned from the beginning , that this person had some complement to add to this other person.

I didn’t expect to see that many people. It was way too much to make a standard narrative documentary, and some of the content was quite deep, hard to make something that was digestible enough for a onehour and a half documentary. So I had to think about the format, how it could best be used. But at the same time, I wanted to make a long documentary… I wrestled with that for more than two years and finally was at peace with it.

This website is the testimony of my journey, a gift to all, so take your time, let the words resonate in you…

In the Deep Peace,

I know that people’s  attention span is not that great in our social network filled time. I found out that most of the ideas conveyed in my interviews could be summed up in around one minute. I had so much interesting content so I decided to try to release as much of the material that I had. I’m still creating new interviews from the stuff that I have so this content will grow as time goes by.

How do you illustrate inner change?

It’s not an easy thing to film how people have used their inner resources to change themselves. I decided to use some footage of nature and dance. I chose nature because it gives a contemplative point of view and it makes us go beyond our small selves. I chose dance because it’s an artistic discipline that can speak for itself and it conveys movement, grace and feelings.

I went to Iceland to film a dancer and capture some great footage of nature.

For each one minute interview, I released the interview with a meditation and a quote.

I created some short films, either meditative short films or short films based on a story or some interviews. Different short films will be released each month. The idea is to go deeper on a subject.

Where was it filmed?

The dances were filmed in Iceland, Israel (Negev desert) and Georgia.

The images of nature were shot in Iceland, USA, Holy Isles England, Palestine/Israel, and Switzerland.

Who funded this documentary?

I received a grant of 5000$ to help with the documentary part in Nigeria from “La société de Bible du Canton de Vaud“.

I received 3000$ from close relatives.

How was the music recorded?

The music was recorded live in Chernobyl by Michael Gungor. More information here.

Two shorts films were made with sign language and dances. The idea was to introduce people to a culture that is not well known, a culture where there are no spoken words to express emotions but where the language is the emotion. It was also a way to make us see and not think about something, to in some ways, shut off the brain to simply watch even if we don’t understand the language and let it touch us.

I’m currently opening a hypnotherapy office, a different way to help people find meaning with the life and their inconcious mind.